Born in Grahamstown, South Africa, Dr. Daya obtained his PhD in pharmacology from the Medical University of South Africa (MEDUNSA) in 1985 while he was a senior lecturer in pharmacology. He then joined Rhodes University and became a professor of biochemistry, and later, professor and head of pharmacology. In 2009, he joined Ross University School of Medicine (RUSM), where taught in the Medical Education Readiness and preclerkship programs. After about 10 years, he rejoined Rhodes as head and dean for two years before returning to RUSM. With a research focus on neuropharmacology, Dr. Daya has published 116 scientific papers and holds a number of awards, including being a Senior Fulbright Scholar at the University of Texas in San Antonio and The Bristol-Myers Award for excellence in neuroscience research. Additionally, Dr. Daya has given several workshops on conducting research, as well as scientific writing and publishing, and has supervised numerous MSc and PhD students. 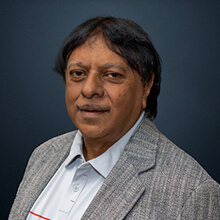